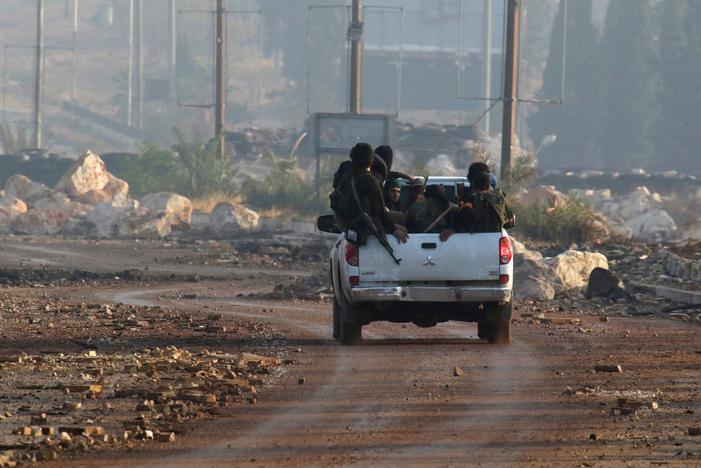 A scene from government held western Aleppo - there's not much left to bomb.
According to as yet unconfirmed reports from Syria, poison gas cannisters were fired at a government-held area of Aleppo earlier today, causing at least 15 people to seek treatment for skin burns and breathing problems.


State news agency SANA reported that “shells containing poison gases” had been fired at the residential district of al-Hamdaniya.
SANA did not report any deaths, but pan-Arab Al-Mayadeen channel stated that at least one person died, while 15 others are believed to have breathing difficulties after inhaling the gas. They are now being treated at the local hospital.

Al Nusra front  Islamic extremists (Obama's moderate rebels, funded and armed by the USA)  reportedly used the poisonous gas in an attack on the Assad Military Academy in western Aleppo, as a part of a broader pushback against government positions which was launched on Friday.

It is not yet confirmed what gas was used in the attack, but according to Reuters fighting continues in the area. The head of the political office of the Aleppo-based rebel group Fastaqim denied the report of gas being used in the attack. Syrian state media said militants had fired shells containing chlorine gas at a residential area of the government-held western part of the city, al-Hamdaniya. Rebels denied that, and said government forces had fired poison gas on another frontline.

State media cited an Aleppo hospital director saying three dozen people - civilians and soldiers - had suffered suffocation in the alleged rebel gas attack, but did not report any deaths. There are no reports of ISIS activity in the area but as we now know, all the Islamist rebel groups in Syria are closely linked.


The Syrian Observatory for Human Rights, a UK-based organisation that reports on the war, said it had confirmed reports of suffocation among government fighters in two frontline areas shelled by rebels, but it did not know if chlorine gas was the cause.The rebels said the army had shelled rebel-held Rashideen district with chlorine and shared videos purportedly showing victims with respiratory problems.
Aleppo, Syria's biggest pre-war city, has become the main stage of conflict between President Bashar al-Assad, backed by Iran, Russia and Shi'ite militias, and Sunni rebels including some supported by Turkey, Gulf monarchies and the United States.

A few days ago western media was having hysterics over reports thaa a hospital in which children were being treated had been hit by Russian airstrikes. Things went eerily silent however when the pictures used by pro - Washington news to substantiate the report were found to depict a hospital in Assad held territory that had been shelled by US backed 'moderate rebels.'

‘I’m back from Syria. The media are lying to you.’ Eva Bartlett

A look at our prospects should tway - boy Cameron succeed in obtaining parliament's approval for his wish to join Obama's coalition ofg dodgy political opportunists in their attempt to overthrow Syria's President Assad. Given that Putin has said many times, Assad stays, our outdated war planes don't stand an ice cube in hell's chance against Russian S34s and Growler Surface to Air missiules (SAMs). And that's without factoring in China's pledge to support it's allies Putin and Assad.

Never ones to miss an opportunity to advance their fascistc agenda, the US government is trying to exploit fears generated by the Paris Muslim terror attacks.

Paris Horror Demonstrates Limits On Tolerance And Need For Border Controls
As the lawless criminal scum imported by Merkel in her efforts to suck up to Obama threaten to turn Germany into a third world human cespit, it seems public opinion in European is waking up.

Why is John Kerry suddenly so eager to talk to anyone and everyone about Syria now when the war between Assad and the US sponsored Sunni Jihad has been dragging on for four and a half years? Are members of the Obama administration worried that the joint Russian / Iranian campaign in the air and on land has been too successful against ISIS and exposed as a sham the efforts of the USA and it's allies to 'defeat ...

Russia Takes Over The Mid-East: Moscow Gets Green Light For Strikes In Iraq, Sets Up Alliance With Jordan

Not long ago we were reporting on the way moves in the war against ISIS had shifted the global power balance from west to east, with Putin's decisive and efficiently executed moves to drive the Islamic State forces out of Syria and Obama's failure to repond in any intelligent way demonstrating to the world that the USA had surrendered its role as the dominant military power.

Regime Change As American As Thanksgiving

US President Barack Obama is someone to almost pity. For he has the unenviable task of standing before the nations of the world and blether the self — righteous lies of western propagandists, as he did again, during recent his address to the UN General Assembly.

In was always going to happen once the Russian air force had softened up ISIS and Al Qaeda positions in Syria. With the opposition on the run (and unconfirmable reports suggesting thousands of ISIS irregulars are desterting) thanks to five days of air bombardment from some of the most advanced strike aircraft in the world, we predicted Iran would ...

All Bombs Kill But Obama Only Denounces Russia's And Syria's Bombs

The U.S. government has dropped hundreds of thousands of tons of bombs on Iraq alone in the last dozen years – and even hailed the start of the bombing campaign in 2003 as “shock and awe” – but now has coyly and repeatedly decried the Syrian government’s supposed use of crude “barrel bombs.”

Europe’s intensifying migrant crisis and Russia’s increased military support for President Assad’s regime in Syria, including the establishment of a Russian military Syrian headquarters at Latakia have focused the attention of world media and those of us who like to be aware what is going on to dangerous situation now emerging from Syria’s protracted civil war.

Why Assad is Winning: Victory For Secular Ruler In Syria Will Transform the Middle East.
While mainstream media continue to spin the Washington lie that US sponsored rebels are about to topple the Assad regime in Syria (the story they have been telling us for three years, an examination of the news feeds that mainstream news publisher and broadcasters use, which are free from Washington's propaganda spin reveal a different story.