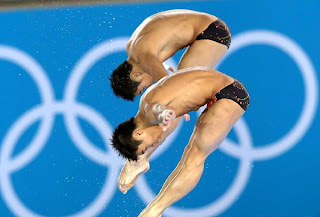 Biggest controversy of the Olympic pageant so far (well the drug test results have not started coming in yet) was the lip synching scandal at the opening ceremony.Seems like a lot of fuss about nothing, we say if its good enough for Madonna and The Spice Gilrs its good enough for the Olympic Games
Posted by Boggart Blogger at 9:50 AM