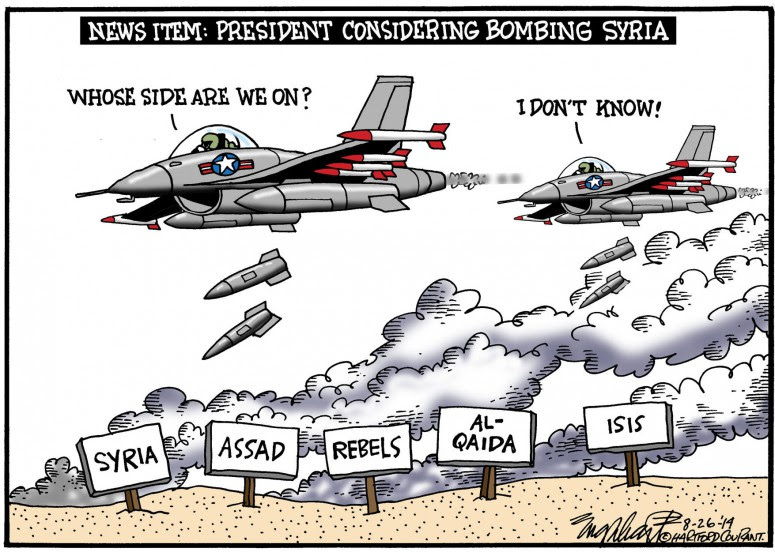 It is widely agreed that Seymour Hersh is one of the few remaining investigative journalists prepared to go out on a limb and challenge the government / financial complex. A quick Google or Bing search on his name reveals the lengths to which government officials, corporate public relations chiefs and mainstream media will go o discredit him.

In May 2015, Seymour Hersh overturned the highly suspect official narrative on the death of Osama bin Laden and in the process created a media firestorm prompting a response from the White House. (Boggart Abroad knows from a reliable source Bin Laden died between 2001 of an untreatable kidney condition that had kept him hospitalised for several years). Former Pakistani Prime Minister Benazir Bhutto revealed this when speaking to UK Broadcaster David Frost in an interview for Al Jazeera [YouTube clip], although the details she gives differ slightly from those we have, the stories are broadly the same. Though the revalation was not picked up by western media, Ms. Bhutto was assassinated a few weeks after that interview.

Now while we would obviously argue that the man taken out by US Navy Seals was not Bin Laden and the operation was staged as a public relations exercise, Hersh's revelations about the events leading to what was presented as the capture and killing of Osama bin Laden eighteen months after Hersh exposed the Obama administration's lies about the Syrian sarin gas attack that would have been used as justification for airstrikes against the Assad regime in 2013 had not Vladimir Putin warned Obama directly that the consequences of attacking Assad would be dire.

We have always said the Syrian conflict was a proxy war waged by the USA against Russia and it seems that unfortunate country, having been ravaged by US and Saudi Arabian sponsored terrorists for four years is now the theatre for what amounts to World War III with the FUKUS axis (France, United Kingdom, USA)and Saudi Arabia,Qatar, United Arab Emirates, Turkey and Iraq ranged against Russia, and Iran all involved at some level.

Three factions are forming in the Mid-East: 1) Russia, Iran, Syria, and Iraq; 2) Turkey, Saudi Arabia, and Qatar; 3) Britain, France, and the USA (with a half hearted contribution from Germany.


The first alliance is pro-Assad, anti-terror. The second is anti-Assad, pro-Sunni extremist. The third is anti-Assad (although less vehemently so), anti-terror (conspiracy theories aside). Note that we've left the US out. Why? Because Washington is now stuck. The US wants desperately to maintain coordination with Ankara, Riyadh, and Doha, but between stepped up media coverage of Saudi Arabia's role in underwriting extremism (via the promotion of Wahhabism) and hightened scrutiny on Erdogan's role in financing terrorists, the position is becoming increasingly untenable. But aligning solely with the UK, France, and Germany entails adopting a more conciliatory approach to Assad - just ask Berlin which, as we reported on Friday, is now working with Assad's intelligence police and may soon establish a base in Damascus.

According to Seymour Hersh’s latest article not everybody in Washington is happy with Obama's aligning the USA with Sunni Muslim extremist regimes such as the absolute monarchies of Saudi Arabia and Qatar. Some elements within the US military have been tacitly cooperating with Assad for over two years, having becoming concerned about Turkey and Saudi Arabia's support for ISIS and other extremist groups.

In a new 6,600 word piece, Hersh details what he says was a covert plot by the Joint Chiefs of Staff to undercut the “Assad must go” line promoted and pursued by the Obama administration and the CIA on the way to sharing valuable intelligence with the Assad government. The report also verifies the role of Saudi Arabia, Qatar, and especially Turkey in arming and financing al-Nusra and ISIS. The full essay published in the influential London Review Of Books (current edition) is not available online, but you can read a precis of it by CLICKING HERE