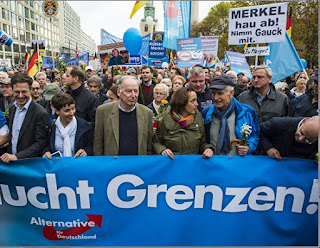 
Germany's Eurosceptic start - up political party, Alternative für Deutschland (AfD) which has founded its manifesto on the failure and unpopularity of Hausfrau Volksfuhrer Merkel's immigration policy that opened Germany's doors and offered the generous benefits paid by the German welfare system to all comers has seen a surge in support nationwide polling at 13 percent, following an upsurge in immigrant violence and lawlessness, according to a recent Insa poll, published by German newspaper Bild.

The Euroskeptic right-wing party has moved ahead of some mainstream parties because its anti-refugee rhetoric chimes with the anti-immigration sentiments felt by people angry that some refugees sexually harassed hundreds of women in Cologne on New Year's Eve, 2015. Chancellor Angela Merkel opened Germany's door to a million asylum seekers in 2015 and continues to insist Germany accepts all who turn up at its borders without passports or any kind of identification.

Germany's "We can do it" policy backfired on the politically correct politicians of the governing coalition following the prospect of another million or more 'refugees' (mostly economic migrants but including terrorists and criminals fleeing justice) arriving in 2016. A recent survey by German television news channel ARD, suggests that 51 percent of people are against the policy.

Following the sexual assaults of women in Cologne vigilante groups began to take the law into their own hands, marching through the streets carrying "rapefugees not welcome" signs and placards. Neo-nazi group Pegida meet each week in Dresden. A recent rally attracted 40,000 supporters, suggesting the anti-immigrant right-wing movement is gaining support in Germany.

With the AfD party reaching 13 percent in recent opinion polls, the movement is no longer confined to the political fringes, as government politicians insist, but threaens the stability of Merkel's fragile ruling coalition and her partners shift policy to align thenselves with public feeling.

Deputy leader of the AfD Alexander Gauland described Merkel's refugees policies as a "gift" to his party, and the opinion polls appear to prove that. A recent survey by ARD-Deutschlandtrend suggests support for the nationalists had risen to 13 percent, making it the third strongest political party in Germany.

Autumn Gets More Interesting As Merkel Admists She May Have Caused balkans War.
The autumn of 2015 has been interesting with the escalation of the war against ISIS by Russian air Force jets and Iranian ground troops in Syria and Iraq, Europe's migrant crisis pushing prosperous north European nations towards civil unrest, and the downing of a Russian airliner over Sinai by as yet unknown causes though western intelligence reports suggest a terrorist bomb was planted on board before take off. And it is set to get more interesting ...
German Opposition Party Warns, Nation Is "At The Edge Of Anarchy, Civil War Is Coming"

As the stituation in German society deteriorates each day due to the vast swarm of lawless, uneducated, infidel hating illegal immigrants that Housfrau Volksfuhrer invited to travel to Germany and replace the established population, social commentators are predicting the country will slide into civil unrest and possibly full scale conflict between supporters of immigration and patriotic Germans
Euronazi Leaders Admit The Voters Are Irrelevant.

European leaders threw threats and warnings at each other at a meeting held on Saturday (24 October) as thousands of undocumented travellers continued to stream across borders into the Balkans. Saturday's meeting was in preparation for European Union talks aimed at deciding on a course of action to tackle the crisis (Source: Reuters)...
German Village Accused of Racism For Requesting Migrants Use Toilets And Not Harass Women

A village in Germany which published a list of ground rules for migrants covering basic standards of behaviour expected in German society has been accused of racism. The list includes matters of basic civility like queueing in shops, paying for stuff and not haggling ovr the price of a tin of beans, to fundamental principles of Western society like behaving respectfully to women who ...
Council Of Europe Concerned At Rising Racism In Germay (but No Mention Of Violence And Sex Crimes Committed By Illegal Immigrants)

The European Union immigration crisis that is now affecting most of the EU's wealthy nations and some that are only just clawing their way out of poverty after independence from the Soviet Union or Yugoslavia, appears to be dividing societies more deeply and pushing many European societies towards civil conflict as the affluent, self indulgent elite, in their efforts to show how caring and politically correct they are, ...
Can Muslim Culture Ever Integrete With Tolerant Western Socities?

We in the developed nations are constantly told we must accept multiculturalism (Why? We never voted in favour of it?), celebrate diversity (We do celebrate diversity, there are thousands of diverse lifestyle within western societies) and adapt to accommodate the quirky but charming traditions of immigrants ...
Hausfrau Volksfuhrer Merkel Confronts Facebook's Zuckerberg Over Policing Hate Posts

It has long been recognized that German chancellor Angela Merkel models her leadrship style on those og Hitler and Stalin. What is not so well know is that Facebook CEO Zuckerberg is collaborating with Merkel, Obama, Cameron and other leaders sympathetic to global fascism to introduce censorship of internet content. Avoid Facebook, Zuckerberg is a Jewish Nazi, how sick is that
Syrian Doctor Makes More Trafficking Migrants to Greece Than He Can Doctoring
A former doctor from Syria has described how he now makes £60,000 a month trafficking people from Turkey to Europe. He has warned European Union (EU) member states that the refugees will continue to come even if all the borders are shut, saying “They will dig tunnels if necessary.”
How Neo - Con and Neo - liberal Globalism Freaks Are Destabilizing Europe According To Plan

A study by our owner/ editor of how the USA led global markets project has destsbilised the middle easdt and why that outcome looks as if it was the long term plan all along. Libya, Syria, Ukraine, Yemen, Afghanistan, Iraq and now Europe ... all are strategically important and all were potential obstacles to Washington's world domination ambitions.
Muslim Only No Go Areas For Police And Emergency Services In Our Cities? - It Already Happened In Sweden.

Sweden continues to lead the way in surrendering its nation, culture and self respect to exremist Muslim dickheads, reasoning that the violent rapists and murderers of the relion of peace will thank them rather than kill them all. but the people all over Europe are waking to the betrayal of their elites.
Syrian Girl's Video exposes western Politicians and Media Lies About Refugees

This girl makes more sense than Obama, Cameron, Hollande, Merkel and all other western criminals and corporate hirelings put together, Maybe one day they will realize that their subservience to zionism only leads ruin of their political credibilty

No Easy Answers For Immigration

The most sensible immigration policy is one that matches demand for labour with supply. While ensuring compassion and capacity for genuine refugees, we should take care that new arrivals looking for 'a better life' do not land in such numbers they become a burden on those that host them.


Britain Unable to Deport Undocumented Migrants
If their asylum applications have failed it is because there is no reason to suspect they face death or imprisonment if they are sent back to their country of origin. So we give them a choice, we'll give you a free passage home or you can work dor your living shovelling shit on a pig farm. These people come to us as supplicants and beggars can't be choosers.

New German Government Smartphone Spyware Will Monitor Citizens’ Calls, Typing AND See Through Their Camera Lenses
The German Interior Ministry has revealed a new “Bundestrojaner” or government trojan horse software that will enable security agencies to track the smartphone activities of anyone who downloads it. We understand Chancellor Merkel's government has also adopted an “off the shelf” tool from a company which is said to help authoritarian regimes track their citizens ...

German Government To ‘Create’ 100,000 Subsidised Migrant Jobs That ‘Pay’ Just €1 An Hour
The German government has announced plans to spend nearly € half a billion on creating 100,000 heavily subsidised jobs for unemployed migrants. Or to put it another way, Hausfrau - Volksfuhrer Merkel is going to pay migrants with taxpayers money to turn up at recreational centers and watch TV or play pool while pretending to do these make believe jobs.
German Authorities Claim Economic Migrants Are Saying They Are Syrian Refugees To Get Into The Country
The shock renewal by Germany of border controls was, it turns out, a consequence of Hausfrau Merkel's ill - advised decision to announce that all Syrians arriving in Germany would be welcomed, a stupid move, probably aimed at sucking up to the terrorist - loving Obama administration in the USA, that was doomed to end in disaster from the outset.

Opposition Party to Sue Austrian Government Over Complicity In People Trafficking
We have reported previously that in their eagerness to complete the genocide of Europe's white working classes, the political and business elites are prepared to make a mockery of their own laws. One way in which this has been done is by turning a blind eye to people trafficking so that the entry of illegal immigrants to Europe would not be slowed by national law. We can't claim credit for the action reported here, we have very few Austrian readers, but it's good to see others are starting to think.
What Hausfrau Mekel Did Not Tell The German Voters Before They Handed Her A Third Term
As anti EU feeling grows and German citizens get angry about the immigration disaster, no wonder Hausfrau - Volksfuhrer Merkel is not happy. And German taxpayers will not be happy when they find out what crazy financial commitments are about to be dumped on them by the EU's poorer members.