Genocidists Go Free, But Only If They Are The New World Orders Genocidists.


I always liked Slobodan Milosevic. Not the man, he was an unpleasant bastard though not as evil as his reputation suggests, but the name. It sounded like somebody who should have been a character in a British children's TV show we all loved back in the 1950s (ooh, I am showing my age). Bill and Ben The Flowerpot Men (BBC video of early black and white episodes) appeared once a week in the Watch With Mother slot for pre-school children. The Flower Pot Men spoke a strange language that, even though it consisted of nonsense words like flobberdop, oddlepoddle and Gloobawaddlehop, we children had no difficulty understanding. 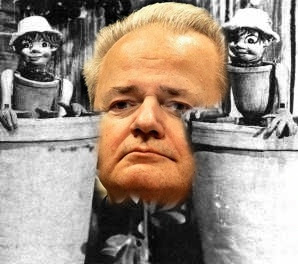 Bill and Ben and Slobodan
Slobbadobbadon, sorry I mean Solobadan, was a very different kettle of fish. Having become the leader of Serbia after the communist Yugoslav Federation disintegrated following the death of communist strongman dictator Tito, and things did not go well. In fact the downfall of Milosovic (after he had allegedly done some nasty things to non Serbs) was to set the pattern for future US / NATO regime change efforts.

After the bloodbath in Serbia that resulted in the US / NATO campaign to remove the Slobbodian regime, the western powers were anxious to justify their 'humanitarian' bombing of Serbia. The Balkan War was anything but humanitarian of course, though British Prime Minister Tony Blair invoked the Holocaust and demanded action against “this new Hitler”. David Scheffer, the US ambassador-at-large for war crimes (Washington truly has no sense of irony), declared that as many as “225,000 ethnic Albanian men aged between 14 and 59 may have been murdered by Milocevic’s forces.

This was the justification for Nato’s bombing, led by Bill Clinton and Blair, that killed hundreds of civilians in hospitals, schools, churches, parks and television studios and destroyed Serbia’s economic infrastructure. It was a purely ideological attack; at a notorious “peace conference” in Rambouillet in France, Milosevic was confronted by Madeleine Albright, a bloodier and more war crazy US Secretary of State than Hillary Clinton, who was to achieve infamy with her remark that the deaths of half a million Iraqi children were "worth it".

The International Court of Justice (ICJ) in The Hague has quietly and posthumously cleared the late Serbian president, Slobodan Milosevic, of war crimes committed during the 1992-95 Bosnian war, including the massacre at Srebrenica.

Far from conspiring with the convicted Bosnian-Serb leader Radovan Karadzic (who did maliciously slaughter a lot of people), Milosevic actually "condemned ethnic cleansing", opposed Karadzic and tried to stop the war that dismembered Yugoslavia. Buried near the end of a 2,590- page judgement on Karadzic last February, this truth further demolishes the propaganda that justified NATO’s illegal onslaught on Serbia in 1999.

Milosevic died in his cell, of a heart attack in 2006, during what amounted to a bogus trial in The Hague by an American led “international tribunal”. Denied heart surgery that might have saved his life, his condition worsened and was monitored and kept secret by US officials, as WikiLeaks has since revealed.

Milosevic was the victim of war propaganda that today runs like a torrent across our screens and newspapers and beckons great danger for us all. He was the prototype demon, vilified by the western media as the “butcher of the Balkans” who was responsible for "genocide", especially in the secessionist Yugoslav province of Kosovo. Prime Minister Tony Blair said so, invoked the Holocaust and demanded action against “this new Hitler”. David Scheffer, the US ambassador-at-large for war crimes [sic], declared that as many as “225,000 ethnic Albanian men aged between 14 and 59” may have been murdered by Milocevic’s forces.

This was the justification for Nato’s bombing, led by Bill Clinton and Blair, that killed hundreds of civilians in hospitals, schools, churches, parks and television studios and destroyed Serbia’s economic infrastructure. It was blatantly ideological; at a notorious “peace conference” in Rambouillet in France, Milosevic was confronted by Madeleine Albright, the US secretary of state, who was to achieve infamy with her remark that the deaths of half a million Iraqi children were "worth it". War crimes are not war crimes it seems, if your on the winning side.

As in Iraq however, Flobbergob's butchers were not the primary victims of NATO bombs and missiles. All but a fraction of America’s much hyped “precision guided” bombs missiles hit not military but civilian targets, including the news studios of Radio Television Serbia in Belgrade. The same precision weapons are still in use, having demonstrated recently their ability to home in on and destroy the only wedding, funeral or child-naming ceremony in a 1000 square mile area, no matter what military target they were programmed to obliterate. Blair described the dead at the Radio and TV station as part of Serbia’s military "command and control" system.

In 2008, the prosecutor of the International Criminal Tribunal for the Former Yugoslavia, Carla Del Ponte, revealed that she had been pressured not to investigate Nato’s crimes. Why would the allies want to investigate, the whole thing had served the allies geopolitical aims so well it could have been planned by Washington and NATO. Oh .... ummmm, you don't think - you know - do you?

The truth is the Balkans War was never justified on 'humanitarian' or any other grounds. The USA and NATO were hellbent on destroying Europe's last independent communist state, wanting to draw the Balkan States into the EU and NATO partly for strategic reasons related to surrounding Russia with US missile bases, partly for reasons relating to globalist geopolitical ambitions. Albright delivered an “offer” to Milosevic that no national leader could accept. Unless he agreed to the foreign military occupation of his country, with the occupying forces “outside the legal process”, and to the imposition of a neo-liberal “free market”, Serbia would be bombed.
Once Nato began bombing, there was a stampede of Kosovar refugees “fleeing a holocaust” (a stampede that has been flowing ever since, flooding the European Union's member states with culturally alien, unskilled, semi - literate migrants). When the bombing was over and Milosevic had surrendered, international police teams descended on Kosovo to exhume the victims of Blair's new "Holocaust". The FBI failed to find a single mass grave and went home. The Spanish forensic team did the same, its leader angrily denouncing "a semantic pirouette by the war propaganda machines". The final count of the dead in Kosovo was 2,788. This included combatants on both sides and Serbs and Roma murdered by the pro-Nato Kosovo Liberation Army (KLA). There was no genocide. The NATO regime change campaign was a fraud and a war crime. So serial rapist Bill Clinton, serial war criminal Tony Blair, Madeline Albright and other NATO leaders should have been the ones on trial.


As this blog has told you many times, it is the west, the USA and NATO that pose a real threat to world peace. In 1995 Russia was rebuilding after the collapse of the Soviet regime, China was quietly modernising in the far east. As the global political balance stands now, the regime change war on Serbia could not have happened. And by extrapolating that, the wars in Libya and Syria, regime change in Ukraine, the emergence of Turkey as a rogue state in NATO, the rose of ISIS, the European immigration crisis and the new cold war would not have happened.