US Build Up In Syria Prep For War With Iran?

Although reports on the conflict in Syria say forces of the US led coalition are poised push ISIS out of its remaining stronghold in Syria, the city of Raqqa, which as declared the capital of the "Islamic Caliphate" back in 2013, and in Iraq government troops, supported by Iranian elite regiments and Russian air cover are engaged in mopping up operations after the last ISIS terrorists were driven out of Mosul, a degree of scepticism is, as always, necessary when considering news out of Syria.

The U.S. and its allied forces had entrenched themselves in the southeastern Syrian border town of al-Tanaf, in the hope of cutting off a major highway linking Damascus to Baghdad and thus gaining control of all south east Syria. Althogh Washington is now claiming that defeating ISIS is the only objective of the US military action inside Syria, we should keep in mind that right up until the end of his presidency, Barack Hussein Obama regularly repeated that his priority in Syria was to depose Assad. So what are those American troops doing there, blocking a vital artery connecting two Arab allied states in their own fight against terrorism? Well irrefutable evidence exists that US efforts against ISIS were at best half hearted, in fact three years of US - NATO efforts against ISIS achieved nothing, three months of action by Russia and Iran in support of Assad had the terrorists retreating on all fronts.

“Our presence in al-Tanaf is temporary,” Col. Ryan Dillon, spokesman for the Combined Joint Task Force of Operation Inherent Resolve (CTFO-OIR), said of the U.S.-led campaign against ISIS, via phone from Baghdad. “Our primary reason there is to train partner forces from that area for potential fights against ISIS elsewhere…and to maintain security in that border region and de - escalation zones agreed with Russia.” The Russian Foreign Affairs department say they know nothing of such zones and have certainly never agreed to the esablishment of such areas.

He was speaking truth, as Moon Of Alabama reports:


The U.S. is giving up its hopeless position at the Syrian-Iraq border crossing near al-Tanf in south east Syria. The U.S. military had earlier bombed Syrian forces when they came near that position but it then found itself outmaneuvered, cut off from the north and enclosed in a useless area. 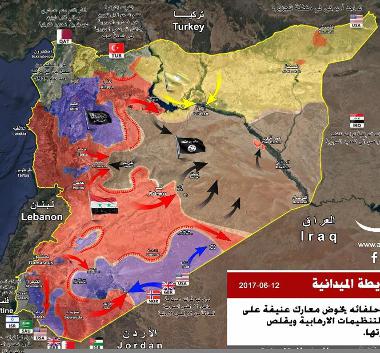 The U.S. plan was to move from al-Tanf north towards the Euphrates river and to thereby capture and control the whole south-east of Syria. But Syria and its allies made an unexpected move and prevented that plan. The invaders are now cut off from the Euphrates by a Syrian west-to-east line that ends at the Iraqi border. On the Iraqi side elements of the Popular Military Unites under the command of the Iraqi government are moving to meet the Syrian forces at the border.


Since May 18, when U.S. airstrikes first targeted Syrian military columns approaching al-Tanaf, American forces have shot down two Syrian drones and bombarded Syrian - Iranian troops several times, citing “self-defense” in justification of each incident In that same period, however, it appears that the al-Tanaf-based U.S. backed "moderate rebels" have notengaged ISIS fighters at any time.

Bouthaina Shaaban, political and media advisor to Syrian President Bashar al-Assad, questions that rhetoric: “When asked what they’re doing in the south of Syria, they say they’re there for their ‘national security,’ but then they object to the movements of the Syrian army – inside Syria?”

She is correct. As this blog has stated many times, under the terms of the United Nations charter and international law, any foreign military presence in a sovereign state is illegal "unless specifically invited by the recognized governing authority," and as President Assad of Syria has stated many times, while Russian and iranian troops are in Syria legitimately, having be asked to assist in combating ISIS by the Syrian government, the US - NATO coalition have no business there at all and are legitimate targets for Syrian and Iranian bullets and Russian fighter planes. The invaders are trying to circumvent the law by claiming that Syria is “unable or unwilling” to fight ISIS and the threat to international security it poses. But “unwilling and unable” is clearly not the case as Syria has done much better against ISIS since warning from Russia's President Putin put a stop the the USA and Turkey's arming and funding the terrorists.

An April 2017 report by IHS Markit, the leading UK security and defense information provider, asserts that the Islamic State fought Syrian government forces more than any other opponent over the past 12 months. “Between 1 April 2016 and 31 March 2017,” says the organization, “43 percent of all Islamic State fighting in Syria was directed against President Assad’s forces, 17 against the U.S.-backed Syrian Democratic Forces (SDF) and the remaining 40 percent involved fighting rival Sunni opposition groups – in particular, those who formed part of the Turkey-backed Euphrates Shield coalition.”

In other words, during the period when IS territorial losses were most significant, Syrian forces fought ISIS more than twice as often as U.S.-backed ones. Which accords with our reports that regime change was always the US priority and while Obama was in power his love of Muslim extremists afforded ISIS a level of protection.

Europe Rejects Obama Doctrine - US Exceptionalism Is Not Acceptable

With a backlash against his efforts to bully Britons into voting to remain in the EU pushing the leave campaign into a narrow lead in opinion polls Obama's vistit to Europe last week could hardly be described as a success. And now he has been told a foreign policy based on 'American Exceptionalism' is not acceptable and the USA must abide by the same international law as the rest of the world

Propaganda War: US Officials Working to Keep Russia, Europe at Odds
Speaking to the US Senate Armed Services Committee this month, Breedlove said that " Russia and the Assad regime are deliberately weaponizing migration from Syria in an attempt to overwhelm European structures and break European resolve." These irrational remarks, and the mainstream media's ability to convey them with a straight face, are an indication of a broken system, experts suggest.
‘I’m back from Syria. The media are lying to you.’ Eva Bartlett

Yesterday, Thursday evening our news feeds picked up the latest development in the soap opera that is the Obama administrations waggering effort to make Russia back down from is's stance of supporting Assad and let the rent - boy President satisfy his bloodlust in bringing Syria’s horrific civil war with bombs and drone strike on Syrian civilians

The NATO summit on Ukraine and ISIS wound up yesterday having achieved exactly what it was expected to achieve - nothing ... There was some kind of agreemant that Britain will join the US is launching air strikes against the Islamic State militias ... A war against ISIS would be a continuation of the war waged in Iraq from 2003, initially to overthrow the tyrant Saddam Hussein, and since his capture to restrain the wannabe tyrants queueing to replace him.

The U.S. Government Is Creeping Into Syria

The USA's Obama Administration has been desperate to start a new war for about three years now. Russia's Vladimir Putin thwarted Obama's first and second attempt to use false flag attacks to justify fullscale military interbention in Syria by the west. Putin has also faced down several attempts by the USA, EU and their neo - Nazi puppet government on Ukraine to provoke an incident thayt would justify a western attack on Russian interests.

Islamic State Threatens UK Says Cameron. Have We Heard Anything Similar Before

According to our Prime Minister, The West is engaged in a generational struggle against Islamic extremism that will threaten Britain unless urgent action is taken to defeat it, David Cameron warns today. (I told you those Tornado jet fighter planes were not in Iraq to drop bulk supplies of rice you beseiged Yazidis.)

Another Obama Sponsored Genocide - not Alawi or Christians In Syria but Yazidi in Iraq.

While the west has been distracted by events in Gaza and Ukraine, and the neo - fascist 'left' have suddenly discovered the joys of anti Russianism and anti Semitism, the FUKUS axis sponsored genocidists of ISIS have discovered another inoffensive minority to exterminate now that the Syriac Christians have fled.


Ukraine Government Fires Missiles At Rebel Held Targets
Leaders in Washington, London, Paris and Brussels continue to pump out the propaganda against Russia as they try to provoke a war over the alleged shooting down of Malaysia Airlines Flight MH17 over Ukraine by separatist rebels supported by Russia. But in spite of claims by Obama and Kerry that the US have evidence that proves it was the rebels wot done it, the more evidence we see, the more likely it looks that the Ukrain government in Kiew was responsible.

It is now known that the uprising in Ukraine early this year that saw the elected government, which was cooperating far too well with Russia for the liking of the western powers overthrown and replaced by a US and EU sponsored gaggle of gangsters, thugs and neo - fascists whose task was to