Baltic Dry Index Crashes. The Global Economy Is Coming To A Standstill 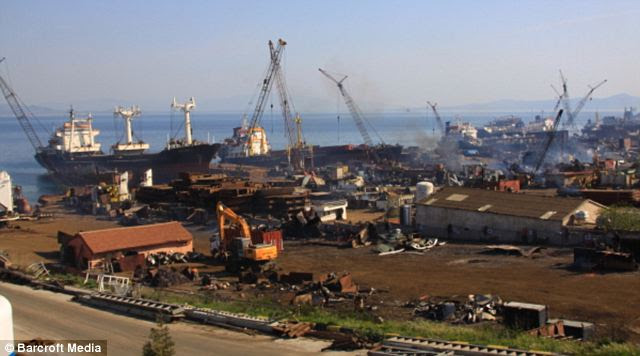 Baltic Dry Index Crashes. The Global Economy Is Coming To A Standstill
11 January, 2016

Skip to update: Cheaper To 'Buy' A Dry Bulk Freight Tanker Than A Starbucks Coffee
24 April, 2016
While we are able to post soothing messages about the volatility in world stock markets, the crazy fluctuations in currency, they ever sinking price of oil at the well head and they way we seem to be returning to using gold as the international currency, because all these markets are rigged and statistics are meaningless, there is little we can say about the state of the Baltic Dry Index other than, "Be afraid, be very afraid." Since we reported a few weeks ago that the index which is a guide to the pricing of marine transport costs for various categories of dry goods.

And it isn't just marine cargo movement that is causing concern

As we explained then, prices in The Baltic Dry Index are determined by the amount of marine cargo capacity available versus the volume of goods needing to be transported.

Since our last report the index has continued to fall, it seems ship owners cannot give away space in their ships holds.

As Dollar Vigilante's Jeff Berwick reports, it appears the worldwide 'real' economy has ground to a halt!!

Last week a contact in The City Of London financial community told me he knew many brokers who had no ships at sea right now, because operating them meant running at a loss.

This week, reports are circulating saying much the same thing: The North Atlantic has little or no cargo ships traveling in its waters. Instead, they are anchored. Unmoving. Empty.

You can see one such report here.

So what is going on, surely it cannot be that no goods are moving. But according to the We checked VesselFinder.com and it appears to show no ships in transit anywhere in the world." website, that is exactly the case.

The world’s economy seems in serious trouble. As all of us have said, nations can’t print money to deflate their way out of recession. All you are doing is hollowing out your economy. Draining it. And sooner or later it’s empty and you have to start a again after several years of chaos, hardship and social breakdown.

It’s no coincidence that The Baltic Dry is down as China is struggling to contain a stock market collapse. The Chinese economic boom has depended on exports to the west of goods formerly made in western economies until some fuckwit economic hit on the idea that corporate profits could be increased if we exported all our jobs to low labour cost economies while the newly unemployed working classes consumed more.

Keep your eye on this shipping story! If it is true and worldwide shipping is disastrously foundering, it’ll only be a matter of weeks before grocery store shelves will reflect that.

As Bloomberg reported at the time,

Rates for Capesize-class ships plummeted 92 percent since August to $1,563 a day amid slowing growth in China. That’s less than a third of the daily rate of 3,950 pounds ($5,597) to rent a Ferrari F40, the price of which has also fallen slightly in the past few years, according to Nick Hardwick, founder of supercarexperiences.com.

The Baltic Exchange’s rates reflect the cost of hiring the vessel but not fuel costs. Ships burn about 35 metric tons a day, implying a cost of about $4,000 at present prices, data compiled by Bloomberg show.

One would think, considering how much the Baltic Dry Index has 'surged' off its all-time record lows - and the noise being spewed by Cramer et al. that this is somehow indicative of the "big comeback" in the Chinese (and world) economies - that the situation would have improved... But it has not!

For the cost of $1 - less than the price of a Grande Black Coffee at Starbucks - you too can be the owner of a 58,429 deadweight tonne bulk carrier...


If You Look At How Fast Global Trade Is Unravelling, You'll Get Dizzy
Governments constantly make positive noises about the health of their economies although most people who are in work have felt no improvement on the position they were in after the crash of 2008. Wagest are stangnant, employment has reduced somewhat (see below) and while the banks are printing money and the super rich are widening the gap between themselves and ordinary people faster than ever, the real situation is frightening.