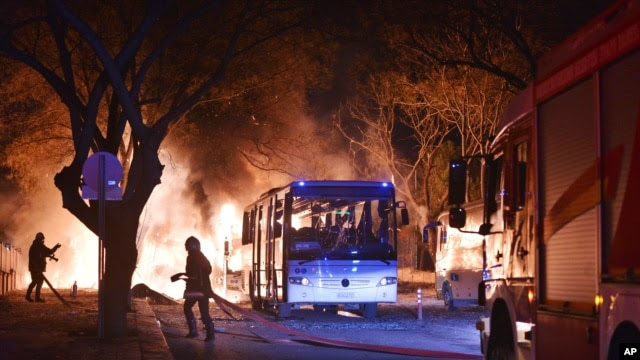 Scene of the car bomb that killed around thirty people in Ankara, Turkey. Although it is not clear who is responsible, Turkish President Recep Erdogan has vowed revenge against Syria's Assad regime and the Free Kurdish Party (PKK)
For several weeks we have been reporting that events in Syria were spinning dangerously out of control, first with leaks of classified information revealing rogue state and NATO member (how did our leaders let that happen?) Turkey had been financing ISIS by buying up oil from wells in territory held by the terrorists, and supplying weapons to ISIS combat units.

Then we had news of Turkey's incursion into Kurdish territory, ostensibly to oppose ISIS (although the fiercely independent Kurds have been by far the most effective force opposing ISIS until Russia intervened. That was closely followed by the news that Assad's forces, backed by elite Republican Guards from Iran were pushing back the forces of ISIS and Obama's 'moderate rebels, the ISIS affiliated Free Syrian Army), we were among the first to report that Turkey and Saudi Arabia were planning a joint invasion of Syria, 'to oppose ISIS' although the primary objective of those nations and the USA has long been the removal of Assad for economic and strategic reasons.

As this blog predicted (and let's face it, a reasonably well educated amoeba could have predicted it,) President Erdogan of Turkey is blaming the Kurds and President Assad of Syria for yesterday's bomb blast in the Turkish capital Ankara which killed and injured many people.

The smart commentators (ourselves included) however were not apportioning blame but expressing concern that the attack, no matter who was responsible, would be blamed on Assad and the Kurds, thus giving the nutter Erdogan an excuse to intensify his actions against Assad and the Kurds which can only lead to a general intensification of the conflict. So how do things stand a day later:

... we wondered whether the bombing - which apparently targeted military barracks - would be just the excuse President Recep Tayyip Erdogan needed to launch an all-out ground invasion in Syria. Turkey has been shelling YPG positions for nearly a week in an effort to keep the group (which Ankara equates with the “terrorist” PKK) from cutting the Azaz corridor - the last lifeline between Turkey and the rebels fighting to oust Bashar al-Assad. It’s unlikely that cross-border fire will ultimately halt the YPG advance and so, Erdogan needs an excuse to send in the ground troops.

Sure enough, Ankara has blamed the YPG for the attack and is vowing to retaliate. “Turkish Prime Minister Ahmet Davutoglu blamed a Syrian Kurdish militia fighter working with Kurdish militants inside Turkey for a suicide car bombing that killed 28 people in the capital Ankara, and he vowed retaliation in both Syria and Iraq,” Reuters reports, on Thursday. “Davutoglu said the attack was clear evidence that the YPG, a Syrian Kurdish militia that has been supported by the United States (USA) in the fight against Islamic State in northern Syria, was a terrorist organization and that Turkey, a NATO member, expected cooperation from its allies in combating the group.”

"The assailants have all been identified. It was Syrian national Salih Necar who was born in the northern Syrian city Amuda in 1992," Prime Minister Ahmet Davutoglu said on Thursday. "YPG is a pawn of the Syrian regime and the regime is directly responsible for the Ankara attack. Turkey reserves the right to take any measure against the Syrian regime," he added.

Obviously, that's utter nonsense. Assad is fighting for his life. Both figuratively and literally. The idea that he spends his days plotting Ankara car bombs with the Kurds (who do not, by the way, wholeheartedly support the regime) is patently absurd.

For their part, the YPG says this is nonsense and also says Turkey’s self defense claim (used as an excuse to justify the shelling at Azaz) is equally absurd. “We are completely refuting that," Saleh Muslim, co-chair of the PYD, told Reuters. "I can assure you that not even one bullet is fired by YPG into Turkey [because YPG doesn’t] consider Turkey as an enemy.”

Needless to say, this "terror attack" is exceptionally suspicious. Turkey is one of the countries with the most to lose if the effort to usurp Assad fails. And as you're likely aware, the rebellion is on the ropes. Aleppo is surrounded by Russia and Hezbollah and it will fall in a matter of weeks. Once it's recaptured by Assad, the rebel cause is lost. The rebellion will be over.

The economic advantages Turkey, Saudi Arabia and the USA seek by deposing the Shia Muslim regime of President Assad and imposing a Sunni Muslim puppet ruler have been well reported and the hoped for benefits to the military - industrial cartel of all out war between NATO and the Russia, China, Iran alliance should be obvious. Needless to say those benefits only apply to people who can afford to living in radiation proof bunkers for a couple of years, byt don't forget Ted Turner, the billionaire founder of corporate media giant CNN is on record as having said the earth's population needed to be reduced to less than a billion people, and multi - billionaire 'philanthropist' Bill Gates in an unguarded moment said his third world vaccination programmes would reduce the population by fifty per cent and you start to see where these sociopaths are heading.

You should not have to 'join up the dots', the big picture is staring you in the fucking face.


The Truth Of What Is Going On In Syria

Raqqa and the ISIS oil trade
Was ISIS a creation of the USA
ISIS, Turkey and the New World Order
Is Syria the USA's biggest ever blunder
Syria is a US Proxy war with Russia
US and UK hypocrisy over Syria
Putin's role in Syria conflict