US General Breedlove admits: NATO did foment war in Ukraine 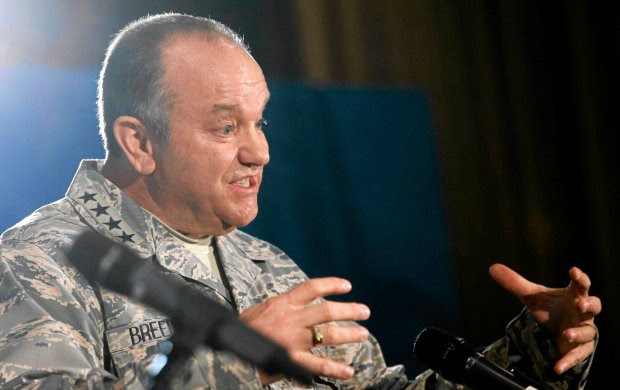 Alternative media, the many thousands of amateur and semi - professional news and opinion websites such as this one were reporting as long ago as 2014 that the US / NATO / EU line on the revolution in Ukraine was a great big steaming pile of bullshit. We knew for example that the CIA had funded and organised the right wing extremist groups responsible for overthrowing the democratically elected (though admittedly corrupt) government. We know that The White House was aware when it approved the regime change operation in Ukraine the people they planned to install as a puppet government in Kiev would launch an ethnic cleansing projects against Russians.


Subsequent leaks have proved our case, and the famous 'open mic' moment by US State Department official Victoria Nuland, when she dissed the EU and compliained that the USA had spent a billion dollars on regime change have provided a smoking gun. But now German news magazine Der
Spiegel publishes damning evidence that one of the US military's most notorious 'hawks' and blabbermouths, Air Forge General Phillip Breedlove not only channelled illegal arms shipments to the rebels but used NATO resources and authority to foment a deadly war costing the lives, homes and security of Ukraine's people. My post from 1st April 2014 recounts how we saw through Catherine Ashton and NATO / EU bullshit right from the start:-

The speed with which European governments, NATO, the US and UN along
with all the global media corporations, established the 'evil Russia' narrative on Ukraine was enough in itself to arouse the suspicions of any freethinking person. And it was unprecedented for the alternative narrative, of the US CIA engineered coup to gain so much traction in the public perception so quickly. We had of course been prepared by the fiascos that resulted from US led intervention in Egypt, Libya, Yemen and Syria.
Der Spiegel, too, was at the time astonished but assumed that the phenomenon is confined to Germany


Those expressing understanding for Russia's move are clearly dominating
the Internet forums and talk shows. One former German chancellor, Helmut Schmidt, even declared that the situation in Ukraine is dangerous "because the West has gotten so terribly worked up about it." The question of whether Putin's actions were legitimate didn't even seem to interest him. "I find it entirely understandable," he said. Another former chancellor, Gerhard Schröder, admitted that he himself hadn't always respected international law.

An unlikely alliance of young activists, German Elder Statesmen, the
right, the left, greens and independents are all repeating the same message - establishing a narrative that is if not diametrically opposite to that of their government, substantially tangential to it. It runs along the lines of Russia and China are not the danger to world peace, the USA and its allies are responsible for destabilising the middle east, attempting to surround Russia with NATO members, threatening Chinese interests in the ease and generally pushing the world towards global conflict.

As
we have pointed out, the phenomenon is not confined to Germany. Across Europe a popular majority are saying the same - to the puzzlement and confusion of the ruling elites political classes. 'Is Germany a nation of Russian Apologists?' asked Der Spiegel last year, and elsewhere the political class have taken to insulting those with the temerity to reject the official narrative.

This rebellion against the politically correct consensus is not just
happening in connection. with the west's relationship with Russia and China, the whole globalist, open borders, cultural Marxist agenda is being questioned and this has led to the rise of new nationalist movements all over Europe and the success and nar - success of Donald Trump and Bernie Sanders in the US Presidential Election primaries. The elites and the media have so far refused to acknowledge that their line it totally oout of step with the public mood.

'Now however it seems Der Spiegel at least has changed it's tune. In an
article "Network Close To NATO Military Leader Fueled Ukraine Conflict"the magazine reports that leaked e-mails from General Breedlove's account prove the USA and its allies were behind regime change in Ukraine.

The photos are the entertaining part of an otherwise explosive collection of Breedlove's private email
correspondence. Most of the 1,096 hacked emails date back to the dramatic 12 months of the Ukraine crisis after Russia annexed Crimea in March 2014. Thousands died in the skirmishes between Kiev's troops and Moscow-aligned separatists. More than 2 million civilians fled eastern Ukraine.

Russia supports the separatists with weapons, fighters and consultants. When people began calling for Washington to also massively intervene in 2015, the Ukraine conflict risked escalating into a war between East and West.

The newly leaked emails reveal a clandestine network of Western agitators around the NATO military
chief, whose presence fueled the conflict in Ukraine. Many allies found in Breedlove's alarmist public statements about alleged large Russian troop movements cause for concern early on. Earlier this year, the general was assuring the world that US European Command was "deterring Russia now and preparing to fight and win if necessary."

The emails document for the first time the questionable sources from whom Breedlove was getting his
information. He had exaggerated Russian activities in eastern Ukraine with the overt goal of delivering weapons to Kiev.

The general and his likeminded colleagues perceived US President Barack Obama, the commander-in-chief of all American forces, as well as German Chancellor Angela Merkel as obstacles. Obama and Merkel were being "politically naive & counter-productive" in their calls for de-escalation, according to Phillip Karber, a central figure in Breedlove's network who was feeding information from Ukraine to the general.

"I think POTUS sees us as a threat that must be minimized,... ie do not get me into a war????"
Breedlove wrote in one email, using the acronym for the president of the United States. How could Obama be persuaded to be more "engaged" in the conflict in Ukraine -- read: deliver weapons -- Breedlove had asked former Secretary of State Colin Powell.

It really does not get any more damning than that. It is way past time We The People took back power from the elites. For a hundred years they have been working towards a totalitarian global government of appointed bureaucrats. Democracy and well educated and well informed middle and working classes threaten their control. But what they have in mind for the world does not serve the intersts of people like you and me any more than it serves the interests of people in Russia and China.

The Birth Of Cultural Marxism
Ever wondered when and where the idiotic pseudo -philosophies of hippys and the idiotic and divisive politically correct dogmas of the modern left were born. The Social justice Warriors (aka 'liberals' or progressives' though they are really neither of these things but instead are moralistic authoritarians who hate free speech and personal liberty and support censorship, government control of media and criminalisation of dissent.


Hacked E mails Prove US, EU and NATO Policy Of Provoking And Escalating Conflict With Russia