France: Left and Right Unite In Desperation To Keep Power 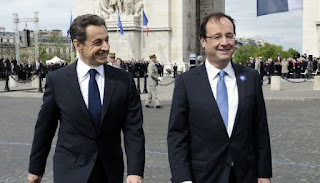 France’s Front National (FN), disappointingly but unsurprisingly failed to win a single regional government in French regional elections on Sunday (13 December, 2015) despite being comfortably ahead in the popular vote after last week's first round. Following a smear campaign that branded Front National as right wing extremists and neo - Nazi, and some pretty unsavoury political chicanery between the socialists and conservatives, which made a mockery of french democracy, voters were scared back to traditional parties. The Socialists led by President Francois Hollande (Le petit crapaud) and former President Nociolas Sarkozy (Le petit ver) had ordered their candidates to withdraw from the run off votes and advise supporters to vote for their traditional rivals in orderr to keep FN out of power.

Similar ploys were used by Consrvatives and Labour in the British election to prevent UKIP winning seats where the anti - EU party was doing well, and by Swedens Social Democrats, Christian Democrats and Marxists to stave off an early election that would probably have seen the anti EU Sweden Democrats become the second largest, if not the largest party in Sweden's national assembly.

The leader of the anti-immigration FN, Marine Le Pen, lost out to the centre-right opposition in the northern Nord-Pas-de-Calais Picardie region after the ruling Socialists pulled out of the race before the second round. Her 26-year-old niece Marion Marechal-Le Pen was also defeated by the centre-right grouping after socialist candidates had withdrawn in the southern region that includes the glitzy resorts of the Cote d’Azur, despite dominating the first round last week.

The FN had topped the vote in six of 13 regions on December 6, but once again suffered in the second round of an election as the establishment parties used bullying and scare tactics to win support from many dissastisfied voters who had declined to cast a vote in the first round. With turnout high on Sunday at around 59 percent, the centre-right grouping appeared to have won at least five of the regions.

It is astonishing how widespread this interchangeable political label thing really is. It has worked since 1992 for Labour and Conservative Parties in Britain, though they make different noises when campaigning the policies in government are as different as bean curd and tofu (It is the same in the USA and Australia and I suspect in Germany, Spain, Italy etc.) Everywhere in the developed world the politically correct consensus seems to hold sway in politics, education, public service and the media. And while the elites have not started burning heretics as the medieval church did, people who challenge the dogma can end up in a lot of trouble.

The loss of national sovereignty since joining the EU and handing over power after power to unelected bureaucrats in Brussels through treaties must have contributed to this melting pot between different factions we call politics these days.

It seems as if the sovereign nations of western Europe are being groomed to become nothing but centrally controlled province of the United States Of Europe. It has seemed so for a long time, as if, eventually, the bankers and corporate money only want to deal with 28 oligarchs, a similar to Putin's Russia - the nation EU leaders spend so much time demonizing.

In the end however, French voters may regret their craven desire to cling to the status quo, the politics of failure. The choice between le petit ver (the little worm), Sarkozy and le petit crapaud (the little toad) Hollande is not really any choice at all.

Cameron's EU Deal As Worthless As Neville Chamberlain's 'Peace In Our Time.'?

Opinion polls show Britain is evenly divided on the question of whether to leave or remain in the EU, though it has been suggested up to 10 million other voters, many of them women, have yet to make a decision. How they cast their vote will shape the future of the world’s fifth largest economy and the EU itself.
Democracy Murdered In France