Call The Hackers: US Superplane Grounded By Software Bug

Over the past few months we have all been given the opportunity to be impress by the abilities of the highly advanced Russian warplane, the Sukhoi Su35. Even The Pentagon's top military aviation officials have been impressed, and we hear what the Chinese have up their sleeves is even more advanced. It was reported late last year during a particularly intense moment in US / Russian relations in the middle east that Pentagon officials had warned Obama not to risk triggering any direct conflict with Russia because the Russians could "obliterate US military capablities."

How did this happen?

Well the Russians focused on what is achievable while American technologists got drawn into a lot of Hollywood fantasy stuff. And the result was:

The troubled creation of the Lockheed Martin F-35 is plagued by yet another technical glitch.

The Lockheed Martin F-35 is not only an extremely expensive aircraft, but is also probably the most software-driven plane ever constructed. And ironically, it is a new software glitch that now threatens the US Air Force’s plans to finally declare F-35 operationally deployable in the near future.
According to IHS Jane’s, the problem lies with the current version of software that runs the warplane’s radar, making it unstable and thus affecting the aircraft’s performance against other airborne targets.

"What would happen is they'd get a signal that says either a radar degrade or a radar fail —something that would force us to restart the radar," Harrigian explained.
The problem was apparently first discovered during tests in late 2015.

"Lockheed Martin discovered the root cause, and now they're in the process of making sure they take that solution and run it through the [software testing] lab," Harrigian said, adding that USAF is scheduled to receive the new software by the end of March.
The F-35 fighter jet is probably the most expensive military aircraft ever developed, with an estimated final cost of $400 billion which is twice the original estimate.
Problems with the F-35 have included flaws in its fuel and hydraulic systems, poor cockpit visibility, faulty radar and ejection seats that don't work. The entire fleet was grounded in 2014 after an engine caught fire as a test pilot prepared to take off. 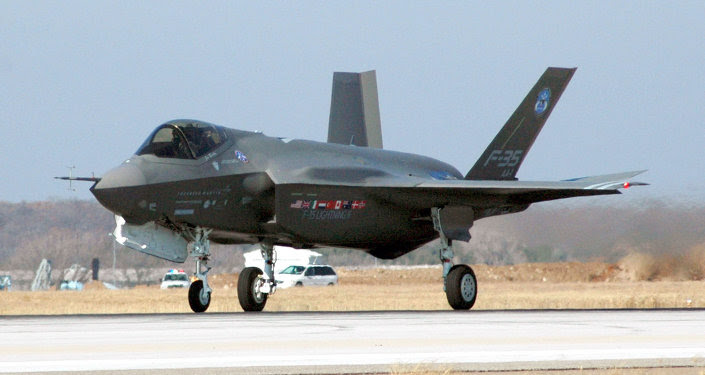 F35 - nice decals but can it get off the ground?