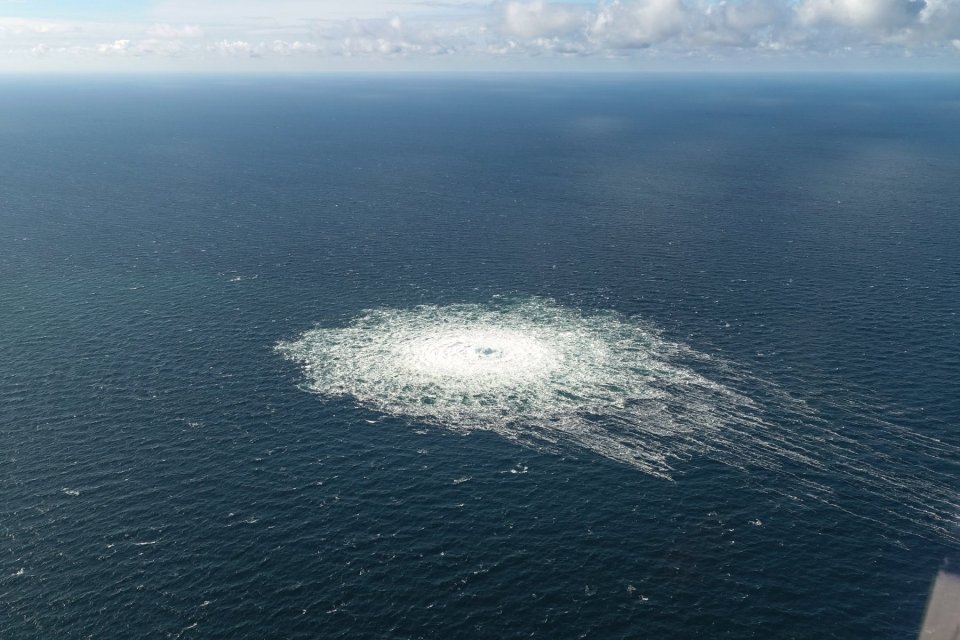 Denmark revealed a picture of the leak taken from above showing the sea writhing with gas: (Picture: The Sun)

A news interview aired by Bloomberg TV on Monday shocked presenters and viewers when the interviewee went right off script and the Ukraine war narrative of Ukraine good / Russia evil / NATO defenders of freedom. Jeffrey Sachs who has in the recent past advised three UN Secretaries-General had been given the script but obviously did not like it and started ad - libbing.  Sachs, now the Director of the Center for Sustainable Development at Columbia University, commenting on the sabotage of the Nord Stream 1 and 2 gas pipelines from Russia to Germany, suggested the United Stats was the most likely perpetrator  of the attacks, when asked about it.

Sachs let the cat out of the bag during the live interview when he said, "The main fact is that the European economy is getting hammered by this, by the sudden cut-off of energy by  the destruction of the Nord Stream pipeline, which I would bet was a US action, perhaps US and Poland." He added nonchalantly: "That is speculation ..." but was given no chance to elaborate because presenter Tom Keane  interrupted him mid sentence. Looking somewhat discombobulated and frustrated over the perhaps unexpected turn in the interview, Keane said: "Uh, Jeff, we've got to stop there," leaving Sachs fuming because he could not continue his train of thought and perhaps reveal what led to his conclusion. The show host then asked, "Why do you feel that was a US action? What evidence do you have of that?"

Sachs answered “Well, first, there is direct radar evidence that US military helicopters that are normally based in Gdansk were circling over this area," noting additionally that "We also had the threat from the US earlier this year that 'one way or another we are going to end Nord Stream'."

The professor then referred to something said by the U.S. Secretary of State a few days ago, "We also had a remarkable statement from Secretary Blinken last Friday in a press conference where he said 'this is also a tremendous opportunity'," which Sachs described as "a strange way to talk if you're worried about piracy on international infrastructure of vital significance."

Sachs is not the first to question the narrative which assumes Russian responsibility for the sabotage, which has become the official narrative in mainstream media despite the fact that Russia's blowing up their own asset, through which a large proportion of their foreign revenue was earned is entirely illogical. A few days ago a former Foreign Affairs Minister in the government of Poland drew the same conclusion, that the sabotage was a USA sponsored false flag event. And outside of mainstream media and the political establishment a consensus has formed around American involvement in planning and authorising the sabotage, with perhaps British, French or Scandinavian personnel involved in the actual operation to provide plausible deniability.

Needless to say the likely American involvement is not an aspect to the "public debate" surrounding the mysterious sabotage of Nord Stream. But while trying to explain his position Sachs stressed Sachs  that many officials and pundits have privately expressed opinions which point the finger at Washington, though they do not  speak of their suspicions publicly:

I know this runs counter to our narrative - you aren't allowed to say these things in the West, but the fact of the matter is all over the world when I talk to people, they think the US did it.

Sachs after being repeatedly interupted and taked over by the Bloomberg presenters, was finally told that the interview should no longer get into soeculation about what "did or did not happen with Nord Stream and who was responsible," because "You don't have the evidence" - a Bloomberg co-host said to close down further discussion of the pipelines.

Elsewhere in the interview Sachs explained that "most of the world doesn't see it [the Ukraine conflict] as we describe it" in the Western mainstream media, as they are alarmed at NATO expansionism.

Do We Have A Winter Of Civil Disobedience Ahead?
As many people in Britain slap on the apres sun gloop in the wake of what passes for a heatwave in these cool cloudy climes, our inept politicians caught with their pants down by unusual weather as usual have heard that that winter is coming and are making plans for a coldwave. We are in the grip of an energy crisis at the height of summer. Last week, it was reported that the UK government is laying down plans for a “reasonable worst-case scenario” including blackouts for industry and even households. And this is as energy prices spiral out of control to new records every day.

Support For EU / US Sanctions On Russia Declining In Central Europe
This is the kind of stuff we and sites like ours have to bring you because you will never see it in mainstream media or on broadcast news. Voices in the EU calling for lifting the anti-Russian sanctions are getting increasingly loud as the sanctions imposed by Brussels and the USA, continue to hurt the nations that imposed them more than they hurt Russia.

Hypocritical Obama says US Foreign Policy Is Not about ‘occupying countries’ & ‘firing missiles’ Umm ....
"America’s world supremacy is not about the number of occupied countries and fired missiles. Its international strength relies on diplomacy, protection of human rights and cooperation with other nations. "The measure of strength is not by how many countries we occupy, or how many missiles we fire, but the strength of our diplomacy and commitment to human rights ..." so how many countries have you bombed Barry, one, two, more?"

Project For The New American Century Born Again
America's neoconservatives are nothing if not persistent. With the American dream turned into a nightmare and a foreign policy geared to making the USA the dominant global superpower in sheds after recent misadventures, a gang of national-security analysts have published an outline of a Republican administration's foreign policy should the GOP candidate take office on Inauguration Day 2017.

America Becomes More Belligerent Towards Russia. Is It Time To Prepare For War
As USA politiians and military leaders in Washington beat the war drum more loudly and European leaders, particularly in Germany and France get more jittery, we ask will there be war and why do the Americans seem so set in a shooting war.

Putin Isolated? What about his new best mates France and Germany
perhaps most significantly is France's continued apparent pivot towards Russia... Following Francois Hollande's calls for greater autonomy for Eastern Ukraine, former French President Nicolas Sarkozy has come out in apparent support of Russia (and specifically against the US), "we are part of a common civilization with Russia,”

The age of financial privacy is over
Yes you read that right. The fascist regime in the USA has usurped to itself the right to raid bank accoutns anywhere is the world. At the moment they are only stealing money by way of tax demands from people who were born on US soil even if those people have not lived in the USA since childhood and have never be employed by a US business.

Obama and FUKUS Axis Air Strikes On ISIS Will Make Things Worse
The bombing of ISIS, the Islamic State is well under way in Iraq and Syria, and as predicted the American, British and French led campaign is already making things worse for civilians among whom the ISIS fighters are dispersed. And of course, far from making the west safer, it is stirring up more hatred against us in the Islamic world.