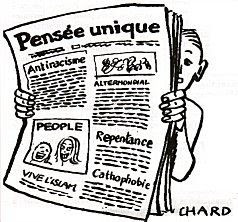 French mainstream media promotes the Pensee Unique (single thought)
Russia is a democratic country with a strong and popular leader, Vladimir Putin, the prominent French scholar and politician Yvan Blot told the Russian newspaper Lenta.ru. While it may stretch the credulity of the average European to accept that Russia is more democratic that even an oligarchy such as The United States, Monsieur Blot could be onto something according to recent opinion poll results in France.

Blot, a close friend and adviser to ex-French President Nicolas Sarkozy, presented his new book in Moscow called "Putin's Russia," in which he discusses that people in Europe have a prejudiced view of Russia. One of Yvan Blot's objectives in the book is to shatter myths about Russia and explain to Europeans that the country is no longer the Soviet Union.

The French politician added that around 40 percent of French citizens have a positive view of Russian President Vladimir Putin. Most of them are young people who actively use the Internet to form their own opinions about Russia and its leader, different from those peddled by the pro - establishment mainstream media, Blot explained.

"Vladimir Putin is currently more popular in France than President Francois Hollande, whose approval rating is around 20 percent," Blot told Lenta.ru, stating that the successful Russian military operation in Syria further helped to improve the image of Russia among French citizens.

Some people in the West might be surprised, but Blot thinks that right now Russia is more democratic than France. While he may have been thinking of how Hollande's socialist government had used the Bataclan terrorist outrage to curtail free speech, the politician brought up an example of how two French universities didn't want Blot teaching politics to students due to his conservative political leaning.

"It's called la pensee unique in France," (the belief that there is only one way of thinking) Blot said with sarcasm.

At the same time, mainstream French media has an anti-Russian and anti-Putin stance with propaganda strongly influencing the minds of French citizens, especially the older generation who believe everything that they hear on TV, Blot explained.

Blot is a conservative political figure and the founder of the Club de l'Horlage, a French national conservative association which focuses on the values of economic liberalism, nationalism and democracy. He is a former Member of the European Parliament, member of the National Front party and served as a leading civil servant at the French Interior Ministry.